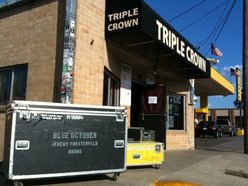 Bio: CLOSED TO RELOCATE. If San Marcos is looking to compete with Austin's "Live Music Capital of the World" designation, look no further than San Marcos' own Triple Crown. On October 10, 2010 the local bar celebrated their 5000th consecutive day of live music. The Triple Crown was opened in November of 1996, and by February of 1997 they were booking music every day of the week. The bar, which is popular with locals and college students alike, is open 365 days of the year. They even have music on Christmas! The range of music one can hear at the Triple Crown changes nightly. From singer-songwriters to rock, from country music to electronica, and even hip-hop and punk, there's a sound to suit anyone's taste. Eric Shaw, the in-house booker, lines up bands from Texas and around the world to fill the nightly roster. During SXSW, many bands come to play at the Triple Crown, and bands touring the U.S. often detour to San Marcos to play at this intimate venue.