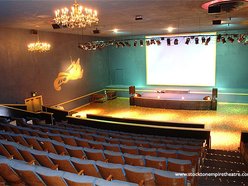 Bio: VENUE History The History of the Stockton Empire Theatre, dates back to 1945 when it was simply called “The Stockton”. This was the seventh theatre to carry the city’s name. Constructed at a cost of $150.000, it was the first theatre built away from thriving Downtown and quickly drew masses - turning it into an icon of Pacific Avenue’s “Miracle Mile”. Feb 6, 1945 marked the Opening Night of The Stockton with a Hollywood premiere - sneak preview. In the mid 1970’s the theatre was expanded into a four-plex. Three modern cinemas were added to compliment the 1000-seat grand cinema. It was now to be called “The Stockton Royal”. Through the next thirty years, the theatre changed hands several times, and while successive owners attempted to breathe new life into the complex, the Royal ultimately, gave way to the emergence of the megaplex, and ironically closed as a result of Downtown's City Center Cinemas' long anticipated opening. Under new ownership in 2005 (read press release), a major updating has brought new life to the renamed Stockton Empire Theatre. Now the Stockton Empire Theatre houses not only film screenings, but live performing arts as well. The Empire Theatre has been showcasing local theatrical companies and various stage performers. Additionally The Empire will continue to make available its auditorium for independent and classic film screenings, art showings, jazz performances, musicals, dance, opera, ballet, lectures, banquets; and also serve as a studio for local independent film makers.