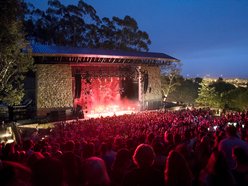 Bio: Built in 1936 with federal funding from the Depression-era WPA, the Santa Barbara Bowl was originally designed to serve as an annual performance venue for Fiesta. Imagine one hundred horses with costumed riders carrying torches and descending from the Riviera into this beautiful amphitheater. The original construction included a wooden revolving stage that was destroyed by a flood during an El Nino winter in 1939. It was replaced by a concrete stage that was used until the end of the 2001 Concert Season. Cracked and falling apart, the Bowl rebuilt the stage, dressing rooms and new restrooms (all located under the stage) using the same structural specifications as freeway overpasses. This stage will soon house a permanent pavilion where the Bowl Foundation will present a diverse array of musical entertainment. The Bowl's FoundersThe Bowl has become a home for the performing arts in Santa Barbara. As the largest outdoor amphitheater in Santa Barbara County, capacity 4,562 the Bowl retains its intimate ambiance while offering the freedom of a beautiful and natural outdoor venue.