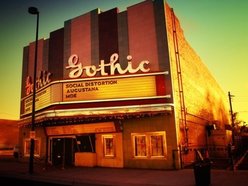 Bio: The History of the glorious Gothic Theatre began in the roaring Twenties when magnificent movie palaces were the center of entertainment in society. The theatre’s grand art deco style awed the thousands of Denver residents who came to view the classic movies of the period. Its importance to the area may never be fully understood by those who were not there at the time. Generations of families spent hours of their lives within the theatre’s famous walls dreaming, laughing, crying, being entertained, and most importantly, creating memories. The theatres place in Denver’s history was cemented when the Gothic became the first in the city to show talking movies. Talk about blowing minds. As time passed the fate of the Gothic began to change. With changes in ownership came changes in the architecture and look of the beautiful building. In the 1940’s the front faÃ§ade was radically altered to keep pace with more modern tastes. Luckily the interior art deco finishes were left untouched (the rounded walls and wonderful recessed coves remain to this day). This atmosphere helps the building retain its connection with the historical past. At one time the theatre was graced with an entire Chinese village painted on its walls and a very large dragon looming from the ceiling. What fun that would have been to see! Time marched on and the theatre went from showing first run movies to struggling to survive. Different owners tried different things with little success. In 1998 the Gothic was reborn when two friends who love music and love to dream purchased the building out of bankruptcy, saving it from the wrecking ball. Retaining the art deco accents, the new owners remodeled and rebuilt the theatre from the foundation to the roof. Bringing in artists and designers who shared their passion and understood their vision, the two transformed the theatre into one of the premier music venues in the world. It is truly one of a kind. From the incredible interior paint scheme to the newly created wrap-around balcony to the refurbished original marquee no detail has been overlooked. The brand-new state of the art sound and light system was icing on the proverbial cake. On June 23, 1999, when the very appropriate legends of New Orleans, The Rebirth Brass Band, took the stage, the glorious Gothic was back in the business of making memories. The Gothic Theatre is located in the City of Englewood and is not affected by the recent change in Denver liquor license policy regarding all age