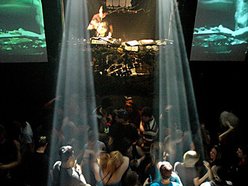 Bio: In 1983, 3 friends decided to open a cultural center/ bar focused on showcasing different types of art. The place would be baptized Foufounes Electriques (Electric Ass). When Foufs opened it’s doors, the place looked more like a public artist hang out than an actual bar. One regular event that brought a lot of visibility to the bar was the «peinture en direct» evenings, where awesome local and international artists created live paintings on canvas, on people or on the walls… Attendees’ really enjoyed the «peinture en direct» sessions. Even The National came by for some coverage of the beloved sessions. Other forms of art at Foufs included electronic video fests, DIY fashion, and of course, music. Towards the end of the 80s Foufs started to build what would become one of the hottest stages in North America. The show room got a total renovation, new sound equipment and new employees came into the fold. One of them was Sylvain Houde, who started out by spinning and quickly moved on to producing shows. Bands like Front 242, GG Allin, Bérurier Noir, etc. were brought in by Sylvain. During the early 90s if you hung out at Foufs , you could of seen Mudhoney, Superchunk, Nirvana, the Melvins and New Model Army in the same month. Normand recalls a certain month of May where Foufs had 31 shows in 31 days! Foufs appeared to be the Canadian CBGB’s, already recognized worldwide as a great alternative venue, the best bands of the times would come to play. Bands like Green Day, Smashing Pumpkins, L7, Eric’s Trip, Nirvana, Social Distortion, Young Gods, Jawbreaker, Suffocation, Queens of the Stone Age, Neurosis, Fu Manchu, the Misfits, and so on… Today, the dance floor has taken a new rise, but Foufs still remains a leading venue in Montreal for all genres of music. Foufounes Electriques was and still is an institution, at a time when the city really needed someone/somewhere to host the best bands, Foufs revealed itself as a pillar for the Montreal underground scene.