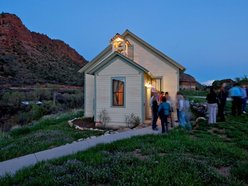 Bio: Brief History of the Cardiff Schoolhouse In 1887 on the plateau formed by Four Mile Creek and the Roaring Fork River, the Grand River Coal and Coke Company platted the Cardiff town site to house their employees, who were primarily of Italian decent, and those of the Colorado Midland Railroad. Located immediately adjacent to the coke plant, at its peak the town reached 400 people who lived in long, narrow houses described as 'shotgun' or 'railroad' cottages. A post office, general store, the Hotel deCardiff boarding house, railroad depot, luncheonette, and saloon completed the town's amenities. In 1889, School District No. 25 constructed a schoolhouse to serve Cardiff residents and families living south of Glenwood Springs. The one-room, rectangular building, educating first through eighth grade children, was located one mile north of Cardiff toward the Roaring Fork River and was sited specifically to be away from the smoke and noise of the coke ovens. The small school house served 30 to 40 students per year during its 58 year history. By 1910, coinciding with the coke oven's peak production, the school enrolled 75 students, which necessitated the addition of another room. The 'L' shaped addition was about the same size as the existing building, 25 by 40 feet. Also at this time, a belltower was added atop the entryway. Always the social hub of the community, the schoolhouse held English classes for the Italian miners in the evenings and on Saturday nights it was the venue for community dances and dinners. By 1917 the coal industry plummeted and with it, the town of Cardiff. to make way for Glenwood's new airport in 1936, the City of Glenwood Springs moved the schoolhouse 700 feet to the south and placed it on the foundation of what had been the Cardiff saloon. In the move, both the bell tower and the 1910 addition were destroyed. The school lingered on until 1947 when it was closed forever. Primo Martino, who served 17 years as the school board president, commented: "Closing the Cardiff School was the hardest thing I ever did." After 1947 the schoolhouse gradually fell into disrepair and in 2002 it was in danger of being demolished for commercial development. Red Mountain Friends of Historic Preservation in partnership with the City of Glenwood moved the schoolhouse, placing it within 200 yards of its original location along the Roaring Fork River. Red Mountain Friends then spent the next four years restoring the building to look much as it did in 1889. In 2006 Red Mountain Friends deeded the schoolhouse to the City with the intention that it be used and a venue for community events and education. A small museum is set up inside the school with items from throughout its 121 year history.