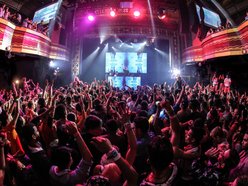 Bio: Webster Hall is North America's premiere nightclub and live music entertainment venue. Located in New York City's famous East Village, it can easily be said that Webster Hall was the first modern nightclub and event space of it's kind in America. This 40,000 square foot architectural landmark first opened it's doors in 1886 and has been a gathering place for the people of New York City and the World for 137 years. Today, Webster Hall stands firmly as NYC's largest and longest running nightclub and entertainment venue. With 5 or more unique environments throughout the building and a 1,500 capacity theatre space on the second floor, Webster Hall regularly hosts performances by the biggest artists in the world as well as the greatest parties on earth. Artists such as Ray Charles, Paul Simon, Green Day, The Killers, Prince, Nine Inch Nails, Micheal Bublé and Mick Jagger are among the notables that have graced Webster Hall's internationally recognized stage in recent years. Additionally, Webster Hall hosts the official NYC Halloween Parade Afterparty and New Years Eve Ball annually - spectacles of celebration that must be experienced to fully understand. For 20 straight years, Webster Hall has operated as the number one danceclub in New York City. Open every Thursday, Friday and Saturday night, over half a Million guests will revel and dance together on it's famous dancefloors this year. The Grand Ballroom is regularly home to performances by the top DJs on Earth - MSTRKRFT, Justice, Deadmau5 and Tiesto are just a few of the names that have electrified audiences and shook Webster Hall to it's foundation on a club night. Each of Webster Hall's five unique environments feature a different style of music. Saturday nights, Webster Hall transforms into the World-famous CIRCUS party, with stilt-walkers, trapeze artists, tarot readers, fire breathers, snake ladies, go go dancers and other spectacles sprinkled throughout. With an entire street practically dedicated to Webster Hall traffic, it's easy to spot the gateway to the ultimate dance party in NYC. Among it's many credentials, Webster Hall was named Nightclub & Bar Magazine's BEST CLUB of 2011. Webster Hall's magnitude and longevity are unmatched worldwide - garnering it's reputation as "The Greatest Nightclub on Earth". In the 1910's, Eugene O'Neil - the great American playwright and leftist political thinker - declared Webster Hall "The crown of the East Village" In 2004, Prince declared Webster Hall "the best stage in NYC". Explore the venue that for over 120 years has been a focal point of cultural celebration and freedom in the heart of the world's greatest stage - New York City.