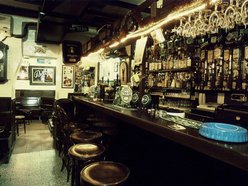 Via dell'Olmata, 43, Rome, RM, IT
Get directions

Bio: The first Irish owned and run pub in italy "The Fiddlers' Elbow" was opened in the fall of 1976 by Gino,Orazio,Mary and Anthony in via Sforza,Rome. The pub was very small but always full and led to the opening in 1979 of it's present location in Via dell Olmata (Anthony leaving and Richard taking his place). Being such an old pub,and having been the first in Italy, has led the pub to becoming very well known not just in Italy but also in many other countries around the world. The pub can be the ideal venue for meeting up with old friends, party nights or just relaxing over a glass of wine or to keep up with all the major sporting events. The pub is situated in the heart of "Old Rome" not far from the central train station and just ten min's walk from the Colosseum. Often music is played and the pub is equipped with Sat TV Pool and Darts and is air-conditioned.