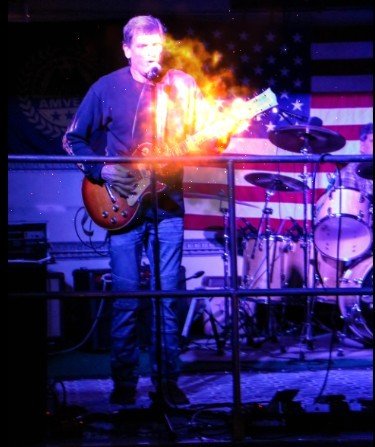 Thank You for being here. Please take a moment and check out the music. I’m a “One Man” production performing Lead Guitar, Bass Guitar, Edrums, Vocals, Lyrics, Songwriting, Recording Engineering, and Producer!
I have a passion for writing Rock Songs and strive everyday to be an accomplished Guitarist and Songwriter! Please come Rock With Me and let me know what you think!
All my songs are available for you to enjoy free, however all my music is available for your “Right to Use” and so are my skills!

Update: I am now AVAILABLE for hire as lead guitarist/singer-songwriter in the Tampa Bay Area and beyond Tampa for "The Opportunity"......Come on Nashville, I'm just down the street.
Also all music produced here and all instruments are from me. I created all the E-Drums (No Drummers), Bass Guitar, Rhythm Guitar, LEAD Guitar, Vocals, Lyrics*, Recording Engineering, Sound Reproduction, Studio Engineering and Design and hopefully a "Great Song"....
Opportunity Update:
The Eagle Tribute didn't work out but I learned the hardest of Joe Walsh. Go check out my "Hotel California" recording I did get out of the deal......

I've been informed that Joe Rodriguez is ill and unable to perform until further notice. The project has been cancelled for now. As you know they were "Paying" all musicians "weekly" for rehearsals...Like it should be for a serious production requiring serious dedicated musicians. And THEY are!

General Summary of Qualifications:
• (1967) Learned guitar from my father and his Mel Bay guitar book of Hank Williams senior. Quickly turned to Beatles, Beach Boys and then in (1969), Crosby Stills Nash and Young....I grew up fast when the Hippies moved in the neighborhood. You know what I mean? I was sorta young...
• Played in my first band at 17 and played the local fairground in Baton Rouge, La.
• Joined the Fantasy Band (Baton Rouge, LA) as Lead Guitarist busting out Freebird in (1977) and then the plane crash. It became quite emotional to play those months afterwards. Lynard Skynard became my biggest influence next to ZZTop and Aerosmith
• Created my own personal Home Studio and quickly mastered midi sequencing when it was a brand new protocol. Use Audacity, Anvil Studio, Cakewalk Analyzer Pro and more
• Recorded over 1 hour of original material currently waiting to be discovered located on ReverbNation. https://www.reverbnation.com/K2ontheBayou/playlist/-4
• Performed Van Halen’s Eruption at Sykes Enterprises Global Award Ceremony in Orlando Florida (2003). Had 2 months to learn it for the event. Was a key team member in creating the company’s, Limited Bandwidth Band as Lead Guitarist. The band would play at all corporate events and were required to choreograph with production manager’s themes. https://www.facebook.com/alafia.band.riverview/videos/1689620531269208/ .
• Created the K2 Band in (2005) with my bassist Brother Kenny Odom, in Riverview Florida playing Southern and Classic Rock as a DUO, utilizing Midi recorded Drums and Piano as accompaniment. Played venues such as Three Corner Tavern on Hwy 301 and River’s Edge in Gibsonton FL .
• Joined the Alafia Band in (2010) as Lead Guitarist and Lead Vocalist, performing Southern and Classic Rock in Riverview Florida
• Created the K2 and the Bayou Boys Band in (2016). We’re talking about that Throw-Down in the back of our pickup, Today’s Country Rock by Jason Aldean, Brantley Gilbert Gretchen Wilson and more along with “choice” classic rock and patriotic songs. Our new play list can be found on BandMix at: http://www.bandmix.com/k2onthebayou/
2017 - Created K2 Radio for Songwriters . Copyright 2017 All Rights Reserved
2018 - Produced, wrote and engineered the 1st & 2nd K2 Album and currently in studio finishing production. Please stay tuned for my releases.
2018 to 2019...Joined Joe Rodriguez in a "Pay to Practice" project for 8 weeks. Project cancelled due to health issue with Joe.
Creating K2 Band and looking for that right singer/partner.

Here on ReverbNation you will find my favorite undiscovered originals along with some choice southern and classic rock demo recordings. Thank you

NOTICE: The name K2 has nothing to do with drugs or a "stupid drug". The letter K is significant to my FAMILY and goes back to my childhood.