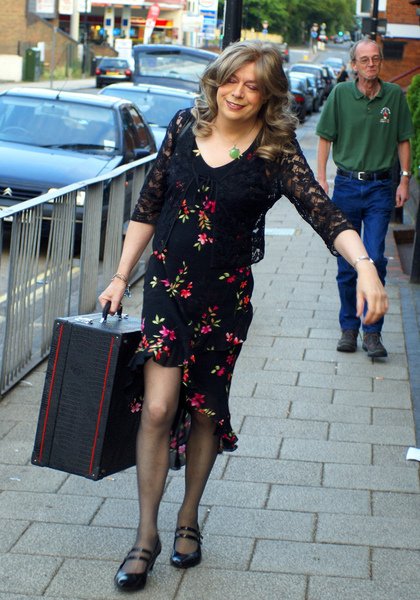 Actually a lot of the music is up beat and optimistic so figure that one out, I wish I could.Perhaps because music takes me to another place that I can not otherwise occupy, or maybe at the best of times opens a doorway for me. I think I have drifted through every musical style in the history of Mankind, ( personkind perhaps, or am I getting a bit Californian ) as I have always been interested in almost every sort of music from pop to the musicals and the classics, I would love to get into film /soundtrack writing but it is of course like every other part of the music world highly competitive.

I am not really sure, its about being restrained by something you can't see but is most definitely there. We all place restrictions on our hopes, and we are often scared to step outside the bounds and see what we can really do.Is this pretentious or what.Whoops! Do you play live? I played live with a band called Elephant shelf.They are a Blues Rock & Jazz flavoured outfit all around England and also the Delta Ladies .Over the past 10 years we have done 1000+ gigs, so it keeps me busy, but I am still thinking of a way to get the Cage on the Road somehow.We also had a cabaret venue called "The Bordello" in Stoke Newington which ran for about 6 months. We have booked bands into the Music Palace in Crouch End which we sometimes played and also i helped run a venue called the Blues Room in St Albans previously..

How, do you think, does the internet (or mp3) change the music industry?

It opens exposure up to everyone, they can make up there own minds about what they want to listen too, it's very democratic. Its great to have control over the music we make and to be able to let people hear it. Would you sign a record contract with a major label? I wish, dream on, someone please keep me in the style that I am not acustomed to !I will be re-releasing some material on cd later in the year, I just need to sort out better artwork. Band History: Almost a band so many times, but now back to being a solo artist with a virtual band. I am looking to put together a live outfit that will play under the name Diana Stone's Glass Cage as I have musicians that I can borrow occasionally for this when they are not too busy

Being a multi-instrumentalist it's difficult often to reproduce the kind of stuff I record in live performance so if if you do get to hear a live version of a Glass Gage song it may sound a little different until cloning is perfected. Your influences? A little bit of everything, just about a child of the sixtys, so lots of early prog rock, but also a lot of folk, a bit of jazz, and anything slightly of the beaten track.So Sounds a bit like King Crimson and Its a Beautiful day in some places. Any one remember Gong there were great too Also I did not realize but lots of old Hippy music influences too have managed to creep into the melange as well.

Favorite spot? My bed, no really ! ! London is great but being a Londoner I would Say that. New York is nice though I have only been a couple of times.Went to Prague last year, liked it a lot, and stayed in a fantastic hotel called the Centrale. Played a few times in France with the Delta Ladies. Equipment used: Korg 01/Wfd, Korg MonoPoly,(venerable old synth),Yamaha digital Piano and Roland SP 505 sampler & Roland electric Piano, Korg X50 for gigs where you have to go by bus. A rather nice old harmony acoustic and well played in Aria Pro Electric which is getting some use live now.Plus other bits and bobs.Guitars of various sorts, electric and accoustic and Violin & Electric Violin & bass.