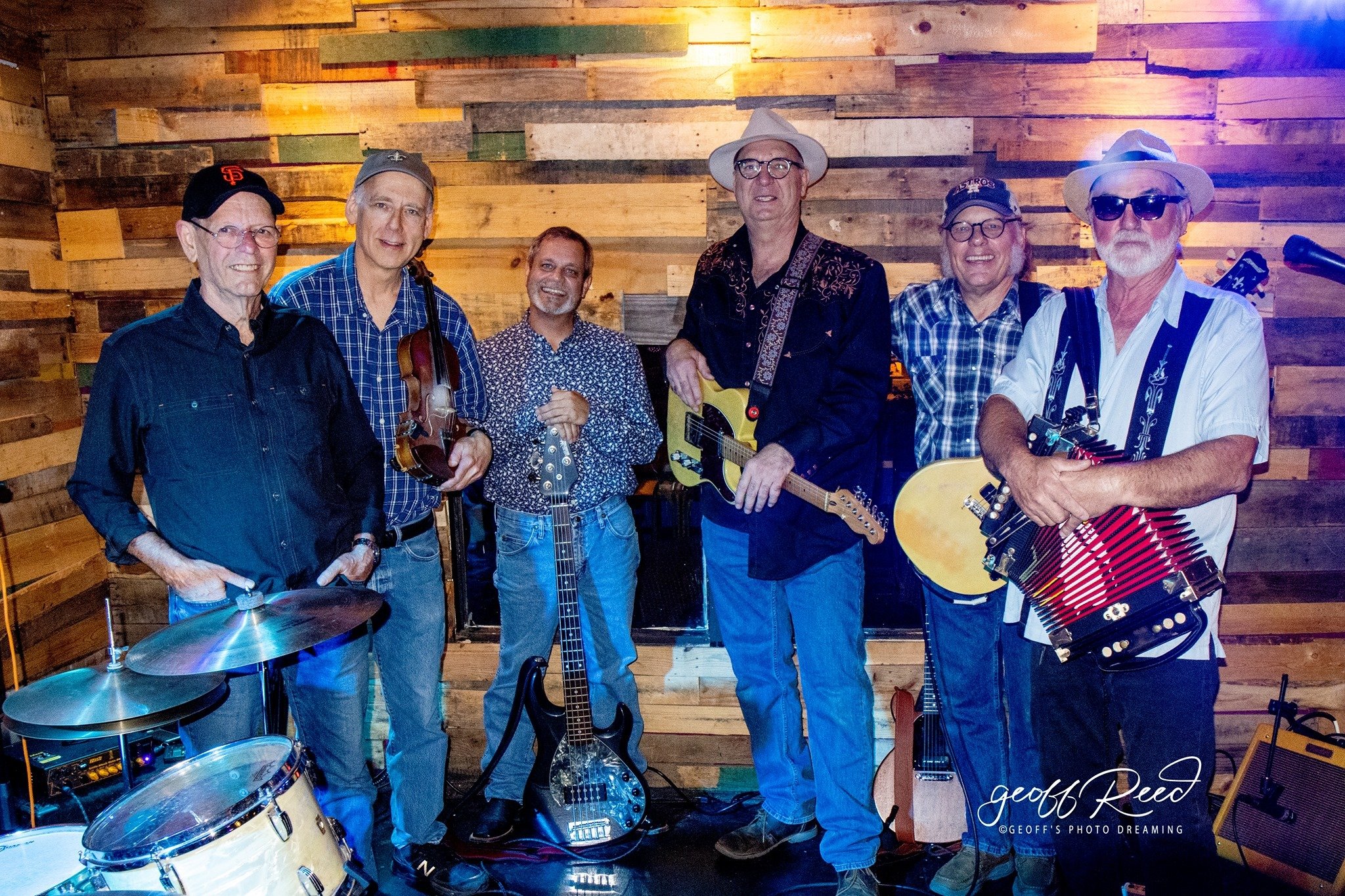 The Has Beans are a “supergroup “ made up of various Cajun bands that have toured nationally and internationally. A short list would include File’, the Basin Brothers, Hadley J. Castille’s Sharecroppers, Coteau and the Red Beans and Rice Revue . They perform an eclectic mix of Cajun, Zydeco, Creole, classic rhythm and blues. The repertoire also includes classic songs from any genre that the band can put their touch on to fill the dance floor! Plus an ever expanding repertoire of original songs. Unafraid to color outside of the lines, but always keeping that strong South Louisiana groove going. The Has Beans are a band that could only have come out of the fertile musical climate of Lafayette, Louisiana!

Musicians Danny Kimball (drums), Ward Lormand (accordion), Blake Castille (guitar), Phil Kaelin (guitar), Tommy Bodin (bass), Henry Hample (fiddle) all spent years playing, absorbing and learning from the legends of Cajun, Creole and Zydeco music. Has Beans inspiration and namesake comes from Red Beans and Rice Revue (including original "Bean" Danny Kimball), who were one of the early influences of Cajun music to the youth of South Louisiana in the mid 1970’s.

In the early 70's dancehalls like Jay’s Lounge, Bon Ton Rouler’ and Hamilton Club became the foundation for a growing appreciation of local music. This is where groups like Red Beans and Rice Revue, Zachary Richard and Michael Doucet's pre - Beausoleil group "Coteau" were setting the old dancehalls on fire.

The music pouring out of the dances was exciting, very danceable and yes, rebellious; Traditional Cajun tunes and instruments blended with the melodic, improvisational lead guitar influence of the Allman Brothers and GratefulDead. The music blasting out of these old dance halls turned a whole younger generation onto the indigenous music of South Louisiana. The brainchild of front man Ward Lormand was to put together a band that could recreate that revolutionary dancehall sound of the mid 1970’s.

The Has Beans members years on the Crawfish Circuit as well as years touring the US and the world have honed their musicianship to where an improvisational extended solo or arrangement could happen at any time, turning a song into something special! All with that Cajun "Joi de Vivre".... Come on out and shake your Ya Ya's loose South Louisiana style with the Has Beans!

About the Musicians - The various members of the Has Beans through their long careers have toured the world, appeared on dozens of recordings and have been honored to have shared the stage with many of their musical heroes. An abbreviated list would range from Dewey Balfa , DL Menard, Hadley Castille... to Chubby Carrier, Keith Frank, Lightning Hopkins, Clifton Chenier... to Joel Sonnier, Doug Kershaw, Hunter Hayes, Paul Simon and Sonny Landreth to name but a few.