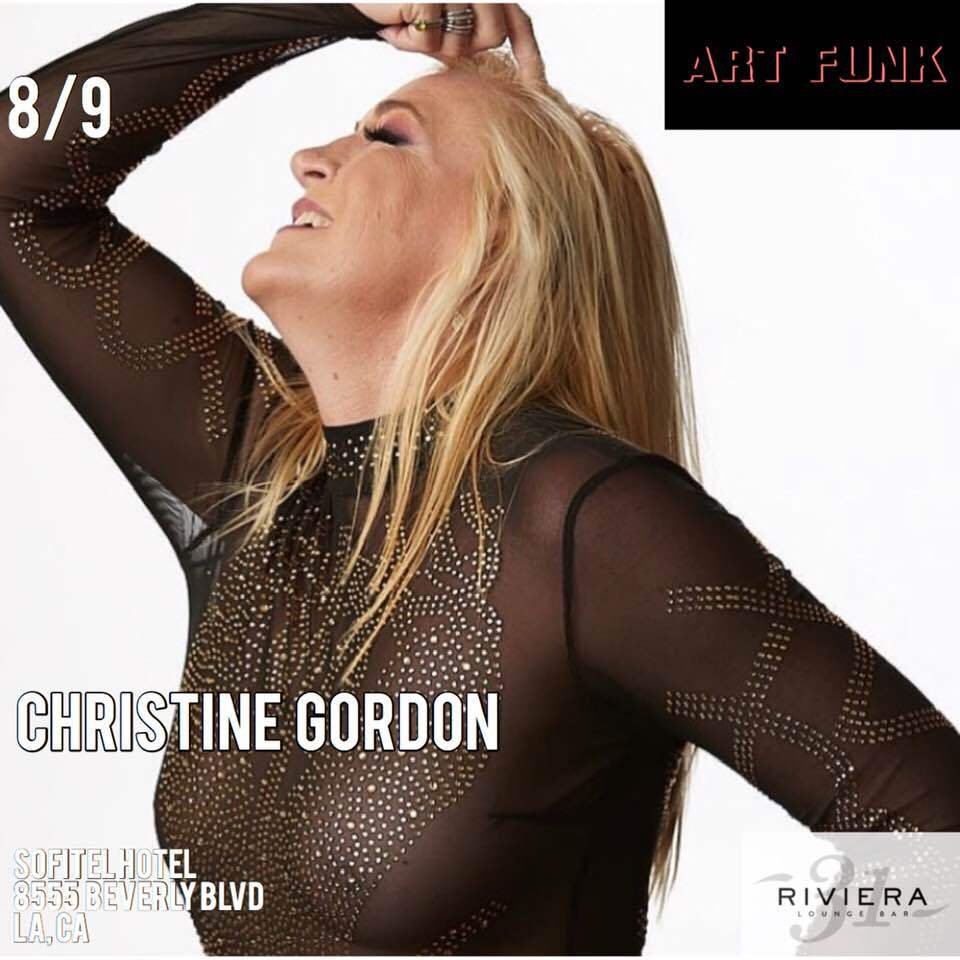 LIVING THE DREAM…ONE SONG AT A TIME! It was the chance of a lifetime: a gig on the CHIC Caribbean island of St. Barth! After spending the past decade rocking festivals, entertaining tens of thousand tirelessly touring the Caribbean and Europe, Christine has finally returned home. Now, armed with a new slew of summer dance singles, each with multiple remixes, the Lioness is back and ready to ROAR! Turn it UP!

“DAUGHTER OF DISCO”CHRISTINE GORDON MAKES A TRIUMPHANT RETURN TO THE DANCE FLOOR WITH HER EMPOWERING ANTHEM “TIDAL WAVE.”PRODUCED AND REMIXED BY UK DJ AND PRODUCER LIAM KEEGAN(SIA, USHER, ENRIQUE IGLESIAS)

The “Daughter of Disco” who launched her multi-faceted career co-writing with the legendary Nile Rodgers, Christine Gordon is gearing up to conquer the dance floor once again with the drop of “Tidal Wave” - an infectious, crazy powerful track that’s primed to become a premier inspirational anthem of our time, helping to lift our spirits above the endless din of division and negativity our world seems to be drowning in of late.

This track is just the beginning of a rollout of explosive singles for the artist, who will follow “Tidal Wave” with the romantic and sensual, mid-tempo summer song “Refill,” a co-write with mega-producer Mark Batson (Alicia Keys, LeAnn Rimes, Beyonce, Sting) that is set to be remixed by Dave Aude (Katy Perry, Lady Gaga, Selena Gomez).

A true force of musical nature, a conversation with Christine will inevitably leave you blown away by her refreshing, exuberant energy.  A freewheeling whirlwind of passion, energy, and soul-deep artistic vision who transcends genre limitations and the trends of the moment, Christine Gordon has just about done and been it all. She’s studied opera, sung jazz at NYC’s Blue Note and R&B in Harlem at the Apollo, and even held court for over a decade in the French West Indies (hence her nickname “StBarthRockStar”).  She’s headlined festivals all over the Caribbean and France/Europe, opening for greats like Akon, Shaggy and Kool and the Gang.  Never one to be kept in a box, the multi-talented singer-songwriter has long defined her own self-styled genre as “Classical Pop Rock Neo-Classic Soul Jazz,” is even affectionately also known as “The Lioness” for the bold, fearless and incredibly powerful way she dominates the stage.

“Tidal Wave” is more than the first venture in the next phase of Christine’s career – it’s a fresh calling on her life. “I truly felt compelled at a certain point, to leave paradise, and the incredibly successful career and business I had built there, and return home to the states.  It just seemed that it was "TIME" ...after such a long, fruitful stay in the Caribbean, to bring all my positive energy home, and to use my voice to spread love and positivity ...and messages of peace.  I wanted to be back in Los Angeles where I could link up and collaborate with top producers of today, and hopefully create songs like the song ‘Just One World’ I wrote with Nile back in the day.... and to use my creative voice as a songwriter to continue to create powerful positive message music in opposition to the hate and negativity that is trying to make us all feel so alone and lost these days.

The singer wrote the original version of “Tidal Wave” with Alex “Cobra” Piper, a member of the legendary St. Maarten based Afro-Caribbean band Youth Waves that Christine sang lead vocals with for over ten years.  After Hurricane Irma nearly destroyed the island, "Tidal Wave" took on an even deeper significance.

As successful as she has been as an artist and performer in so many different realms, all of those experiences are now prelude to her emergence as a contemporary dance artist with “Tidal Wave.” “I believe that every single person on the planet has a unique purpose, or as I like to call it, a singular soul song, that bears the message that they and they alone were born to bring into the world,” she says. “My 'singular soul song' is a message of love, faith, courage and unity. My hope for this project is that the deeper messages in my music can become like happy mantras and powerful rhythmic meditations that can bring people out of the darkness and let them trance out to these uplifting dance vibes. It’s message music for the masses – and why not? Life’s too short not to party every single millisecond. I’m living proof that no matter how impossible your dream may seem, if you can wrap your heart and soul and all those feelings you have inside of you around that dream, you can definitely achieve it.”