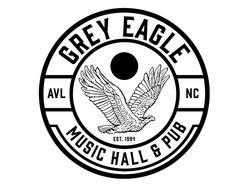 Bio: The Grey Eagle Tavern and Music Hall was first located in Black Mountain, North Carolina. Its name came from the old Cherokee name for that region and the original name of the town. Originally housed in 1994 in a former garage and paint room of a former Chevrolet dealership, The Grey Eagle became one of those comfortable neighborhood bars, hosting local musicians and some touring songwriters. In the fall of 1998, The Grey Eagle bid farewell to Black Mountain with a momentous Halloween show and moved a scant 12 miles away with a beautiful new venue by the French Board River in historic Asheville. June 11, 1999 saw the inaugural with a show from an old friend, David LaMotte. Today the Grey Eagle is Asheville’s longest-running all-ages venue and has hosted over 10,000 different bands and artists including Ralph Stanley, Avett Brothers, Band of Horses, Richie Havens, Frank Black, Deen Ween, Lake Street Dive, Slick Rick, Nathaniel Ratcliff, Sharon Jones and the Dap Kings, Budos Band, Darrell Scott, and many more. Equally impressive is the long list of local talents performing in a setting featuring a large dance floor, relaxing patio area, and one of the best sound systems in Asheville. The performance room boasts an intimate stage with options for seated shows, 2 flat-screen TVs and projector. To complete the hospitable atmosphere is an in-house Taqueria featuring original and creative meals and an ever-expanding beer selection. Under new ownership and management, the Eagle continues to garner local and national acclaim. The intimacy of the stage offers a personal experience between the musicians and the audience. In March, David Dye hosted the NPR series World Cafe’s “Sense of Place” show at the Eagle. For these and other reasons the Grey Eagle was voted by touring musicians as one of the nation’s top 25 live music venues and in 2016, by Garden and Gun magazine, as one of “Ten Must-See Music Venues in the Southeast.” The Grey Eagle’s mission is to spotlight rising talent, offer a diverse assortment of musical genres tailored for the local interests, and provide a friendly and inviting atmosphere for people to mingle and relax.