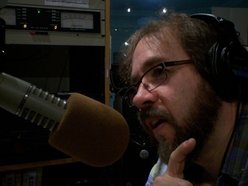 Bio: 'Out of the Woods' and 'Music for the Mountain Bluegrass' are weekly radio programs currently airing on a variety of radio stations all over the country and around the world. 'Out of the Woods' is a 3-hour mostly-acoustic roots music show, while 'Music for the Mountain Bluegrass' is a hard-driving weekly hour of traditional and contemporary bluegrass music. Out of the Woods is an earthy, wires and wood, mostly acoustic program featuring some of the best new and established artists from the worlds of folk, bluegrass, singer-songwriters, alt.country, Americana, blues, classic country, old-time, Celtic, and everything that falls in between. The show is an unpredictable mix flowing like a river between moods, often with an edge or in a melancholy minor key. On occasion, Out of the Woods features interviews and live in-studio performances with national and international touring musicians. Past guests have included artists such as Bela Fleck, Si Kahn, Brown Bird, The Stray Birds, April Verch, The Honey Dewdrops, Dana Robinson, Steve Gillette & Cindy Mangsen, Bill Bourne, Karl Shiflett, Rachel Bissex, Darryl Purpose, Bow Thayer, Cosy Sheridan and many others. Out of the Woods grew out of Jon 'Chip' Colcord's former acoustic programs, The Song Swap and Music For The Mountain, separate folk and bluegrass programs which aired in New Hampshire during the 1990s. As a child, Colcord grew up a ravenous music fan with an ear for both rock and folk. All of these influences converge on Out of the Woods to bring you a mix which is as much on the edge as it is down home. Folk music with a rock 'n' roll soul. More recently, the old Music for the Mountain Bluegrass show has been revived in a one-hour weekly format. Music for the Mountain features that hard-driving bluegrass sound, with classic and new tunes running the gamut from the first generation to the new masters of the genre.The show airs on many of the same stations where you can hear Out of the Woods. Both sows are available to FM and online non-commercial broadcasters on request. For 'Out of the Woods' please contact outofthewoodsradio@gmail.com For 'Music for the Mountain Bluegrass' contact bluegrassmountain@aol.com http://www.outofthewoodsradio.com/ http://www.musicforthemountain.com/ Current affiliates! CJMP, KGIG, KONR, KXCR, WLSL, WMNB, WRAQ, WSCS, WYAP, Boston Free Radio, Bumps Radio, The Global Voice, Homelands Radio, Neopa Community Radio, PineKONE Radio, Shout Radio, Sword Radio, and Southern Branch Bluegrass Radio Music submissions to: Out of the Woods Radio 10 Oriole Rd. Concord, NH 03301 ABOUT YOUR HOST: I first began volunteering on the radio at WNEC at New England College in Henniker, New Hampshire in 1984. I continued at WNEC for more than 25 years, hosting a wide variety of programs, starting out playing mainstream rock. Later, I began my first specialty program 'Music For The Mind', which was an all-Grateful Dead show, running for 7 years (5 under my watch). In late 1993 I started 'The Folk Show' (my first acoustic program), later renaming it 'The Song Swap'. Simultaneously during this period I took over and hosted WNEC's bluegrass show 'Music For The Mountain', founded in 1991 by Ken Ashton. Under my watch, this program went from a heavily progressive toward a more traditional bluegrass format. I had been a huge bluegrass fan for years, so it was great fun to have the chance take over that program. Eventually, I also became involved with various bluegrass festivals as an emcee, and became a founding contributor to Crossroads Magazine, Rootsworld, Country Standard Time, and other publications. WNEC suffered a major technical breakdown early in 2001 due to a storm, so I took about a year off, coming back in early 2002 with a kitchen sink show featuring a wide variety of music called 'Chip's Midlife Crisis'. I eventually changed the name to 'Chip'Show', at which point I started adding in more acoustic music again. Also during this period, I revived the old Grateful Dead 'Music For The Mind' program on occasion, often by request. Another lengthy hiatus helped me to re-focus my energy again toward acoustic music, giving way to ‘Out of the Woods’ starting in 2009. The show left WNEC in 2011, moving to WSCS-FM at Colby-Sawyer College in New London, New Hampshire. Since the summer of 2014, Out of the Woods and Music for the Mountain Bluegrass have fully entered the world of global syndication. It's been great getting to know new audiences all over the country, and all over the world! ‘Out of the Woods Radio' and 'Music for the Mountain Bluegrass' are entirely independent programs produced and hosted by Jon 'Chip' Colcord.