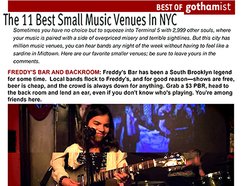 Bio: Recently voted "one of the 11 BEST SMALL MUSIC VENUES in NYC" by the Gothamist, while The Village Voice has claimed that Fred's has "some of the cities most original readings and performances." ” … boasts both cult celebrity & a history stretching back to Prohibition." said Brokelyn Mag. Named "One of Brooklyn's 200 Most Influential Institutions," Freddy's has a decades long track record as a vital cultural hub hosting free music, comedy, readings and performances. The room off the main bar gets music & art in front of hundreds customers, all part of what makes Freddy’s a perennial Brooklyn darling. Freddy's has been voted "one of the Best Bars in America" by Esquire Magazine, as well as countless other accolades by all the N.Y. press. Freddy’s displays warped and engrossing video collages screening in the main bar (and optionally behind the bands) by co-owner, Donald O’Finn. The New York Times: ” Perfect Bar. “ Time Out NY: “Perfect Saloon” L Magazine: “Brooklyn’s most eclectic, smarty-pants & resilient bar.“ Knotmag.com: “A Mecca for artists and writers with no stomach for hipster poseurs or overpriced drinks.” The Wall Street Journal: ” Freddy’s endured as a bar for over seven decades … (now) the inmates are running the asylum.” Bavatuesdays.com: “This storied speak easy represents the best combination of dive bar and underground cultural Mecca.” AM NY: “ One of the Cities most popular Dive Bars” The Brooklynite: “Freddy’s is one of the borough’s most vital Cultural Hubs.” NY Drinker: “..Eclectic art .. trademark energy with their familiar activist-minded crowd & happily dancing bartenders. Hurricane Irene, Hurricane Sandy, a Government & a Millionaire Developer couldn’t close Freddy’s doors: “Freddy’s stays OPEN come Hell or High-water - Literally: “- Brooklyn Vegan: The N.Y. City’s Tourist Board lists FREDDY’S as a MUST SEE LOCATION Local Bozo: “In our ever changing and yuppified city, we need places like Freddy’s to thrive. Being original and respected is not easy to come by. Too many of our city’s watering holes and sports bars appear seriously prepackaged and have no soul to them. When I go sit down at a bar for a pint or even a shot, I want to feel like I am at a place…where I can call home.”