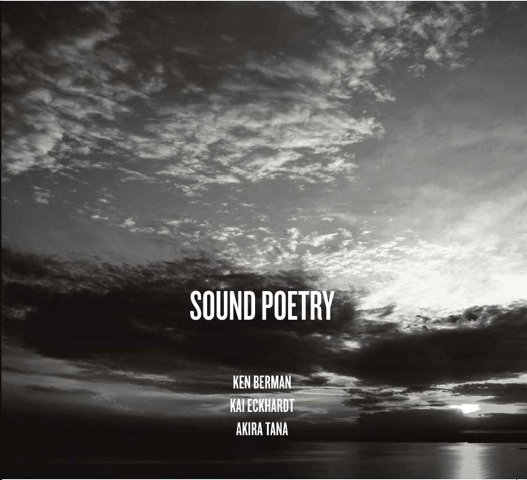 In his latest release "Sound Poetry" Ken Berman's acclaimed trio - featuring bass virtuoso Kai Eckhardt and the extraordinary Akira Tana on drums - reach new heights of kinetic interplay and lyricism as they explore the realms of possibility in improvisation. A follow-up to the trio's highly praised "Looking Forward" ("One of the ten best and most important albums of 2010" - Jazz Times), Sound Poetry was born out of Berman's friendship with the late poet Eythan Klamka (1967 - 2011), and builds on Klamka's notion that "any good musician is a sound poet." Containing tributes to Billy Strayhorn, Bob Dylan, Bill Frisell, Langston Hughes and Bill Evans among others, Berman creates a poetic soundscape full of "delicate sensuality and brilliance" (Le Monde).

LOOKING FORWARD - "ONE OF THE TEN BEST AND MOST IMPORTANT RELEASES OF 2010" - Philip Booth, JAZZ TIMES.

In the January 2011 issue of Jazz Times, critic Philip Booth chose pianist and composer Ken Berman's CD Looking Forward as "One of the Ten Best and Most Important Releases of 2010." The SF Examiner.Com called Ken Berman "a fiercely imaginative pianist" and The East Bay Express praised his album Looking Forward as "daring," "original," and "straddling genres," and compared his playing to Vijay Iyer and Aaron Parks. Le Monde praised Ken Berman as "precise and inventive," "fluid and erudite" and hailed him as a performer whose "complex improvisations are imbued with light and radiance."

Pianist and composer Ken Berman has drawn comparisons with an array of jazz piano greats, including Bill Evans, Ramsey Lewis, Keith Jarrett, Abdullah Ibrahim, Richie Beirach and Vijay Iyer. Born in NY, and originally classically trained, Ken studied piano and composition at the University of Michigan and Berklee College of Music, and later with legendary jazz mentors Barry Harris and Charlie Banacos. He has appeared on the stages of Carnegie Hall, Yoshi’s, The Fox Theater in Detroit, The Museum of Fine Arts in Boston and The Sunside in Paris: he has performed and recorded with Bob Moses, Akira Tana, Kai Eckhardt, John Lockwood, Yoron Israel, Bob Gullotti, Jaleel Shaw, Hadrien Feraud, Marc Van Wagenigen, Remi Vignolo, Sarah Manning and others.

Berman's latest album, "Looking Forward," features a kinetic trio with bass virtuoso Kai Eckhardt and the legendary Akira Tana on drums. Jazz critic Scott Yanow writes, "when listening to Ken Berman's trio it is easy to think of Keith Jarrett and Bill Evans, for Berman's chord voicings and his close interplay with his sidemen recall the work of his two predecessors. The difference is that Berman wrote all selections, he never copies Evans or Jarrett, and at times he sounds more advanced than either of them." His albums "Looking Forward" (2010) and "In Mind" (2006) were placed on the rotations at over 50 NPR and Jazz stations nationwide. His new album "Sound Poetry" will be released in early 2014.