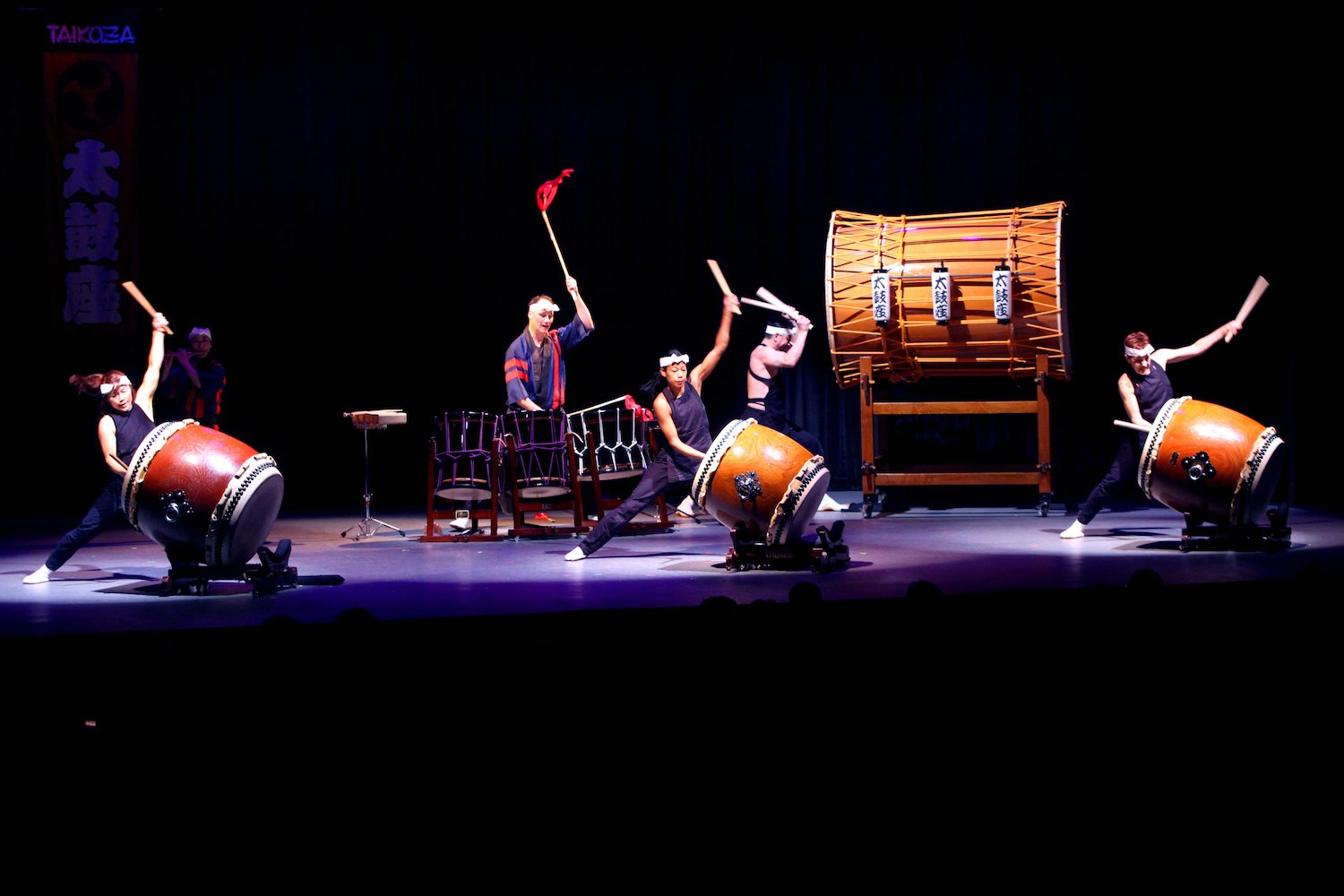 Taikoza.
Experience the thunderous rhythms of the ancestral Japanese Taiko drums and the magical sounds of the bamboo flutes. Hear the 100 lb. Taiko drum; give thunderous voice to traditional and new compositions.
Roughly translated, Taiko means big drums-and that’s exactly what Taikoza brings. Big Drums, powerful rhythms, and electrifying, room-thumping energy. This exciting group draws from Japan’s rich tradition of music and performance to create a highly visual performance. With colorful traditional costumes and dynamic motion, Taikoza’s shows are immensely popular with audiences of all ages.
Drawing from Japan's rich tradition of music and performance, Taikoza has created a new sound using a variety of traditional instruments. In addition to drums of assorted sizes, Taikoza incorporates the shakuhachi and the Fue (both bamboo flutes) and colorful dances.
The group has toured internationally and has appeared on ESPN, NBC, History Channel, etc. Taikoza’s music is featured on Nintendo’s Wii game: Red Steel 1 and 2. The group has performed for the SUMO tournament at Madison Square Garden and tour.
Taikoza presents a very popular program for schools in the New York, New Jersey, Connecticut, Philadelphia and Virginia area for Young Audiences and Symphony Space. Taikoza did a tour of Birmingham, AL area schools funded with a NEA grant that the Birmingham International Festival received.

The members of Taikoza have performed in some of the most prestigious halls and locations such as Carnegie Hall, Boston Symphony Hall, Suntory Hall, Moscow’s Tchaikovsky Hall and House of Music, Osaka Festival Hall, Lincoln Center, Mount Fuji, Miyajima Temple in Hiroshima, Peace Memorial Hall in Hiroshima and many others. They have performed in Russia, Italy, Brazil, Argentina, Switzerland, Germany, France, Mexico, Belarus, Republic of Georgia, and many more.

What the media said:
Reviews for Marco Lienhard and his group Taikoza

“The shakuhachi, played with malleable, expressive attacks, produces a breathy sound, deep in terms of profundity if not pitch. “One can hear already in a single tone the sound of the whole cosmos,” Mr. Hosokawa writes, adding that the instrument evokes “the sadness and beauty of the past.” Marco Lienhard, a Swiss-born master of the shakuhachi, did ample justice to these suggestions.”
JAMES R. OESTREICH, New York Times

“ In its choreography and its vigor taiko becomes almost a martial art, one in which violence has been sublimated into disciplined exultation a blend of high-decibel virtuosity and sinful shakuhachi solos. Precision and energy are paramount here and the product, for me, was medicinal. It is a combination narcotic, stimulant and vitamin pill.”
Bernard Holland, NY Times

The concert was full of stirring Music from Japan. From the most delicate and mournful bamboo flute song to the loudest and most pulsating beat, the dedicated passion of the musicians was inspiring"
The Richmond News Leader

Taikoza has moved the drums in the foreground and into an exciting visual Explosion,
The Dothan Eagle

“ Few adjectives can explain the sound, emotion and overall experience of the pounding drums of a live performance. My senses were rattles.” Nichi Bei Times

“Something strange and wonderful is coming your way. There was thunder and there was lighting and there was the sea crashing against a cliff, and volcanoes. For a few utterly transporting minutes, there was expressed in the metaphors of merciless rhythms and fluttering melodies, anything a listener had experienced, would experience and could imagine experiencing.”
ERIC HUBLER, WASHINGTON POST

"Taikoza is the definition of great art and the audience was not mistaken when they broke into thunderous applause."
FAN of Neuchatel

The performance physical at times, meditative at times was very powerful and emotional. The visual beauty as well as the raw energy of the drummers pounding on the taiko took the audience. It created an emotional tension that was only released at the end with the audience’s heartfelt and thunderous applause. The members of Taikoza beyond their professionalism were able to make Taiko music more approachable to the audience
Corriere del Ticino

“ An amazing shakuhachi player Marco Lienhard has come out with a new CD, truly a very gifted and wonderful sense of musicality. Not since Yamaguchi Goro’s rendition of Kinko Honkyoku music have I felt the need to listen to more of his music. His rendition of Honkyoku form the Watazumi School is incredible and everyone studying the style should listen to it. His powerful and heartfelt rendition of Amazing grace reminded me of such gospel singers as Mahalia Jackson.
From article by Mr. Kishi appeared in Hogaku Journal, Tokyo Japan

“ The drummers were clearly enduring some metaphysical test, but less grueling in the program, Marco Lienhard’s deeply fanciful solos on the shakuhachi looked fully invested and with more than just energy. It is the layering of drums patterns and sonorities in intricate compositions that represent the key to the experience.”
Los Angeles Times

“The musicians’ strong performance really livened up the audience
Taikoza’s energetic performance is a delicate mixture of tranquility and excitement and while using traditional Japanese performing arts they are successful at breaking national boundaries.”
The Arts Cure, 2003