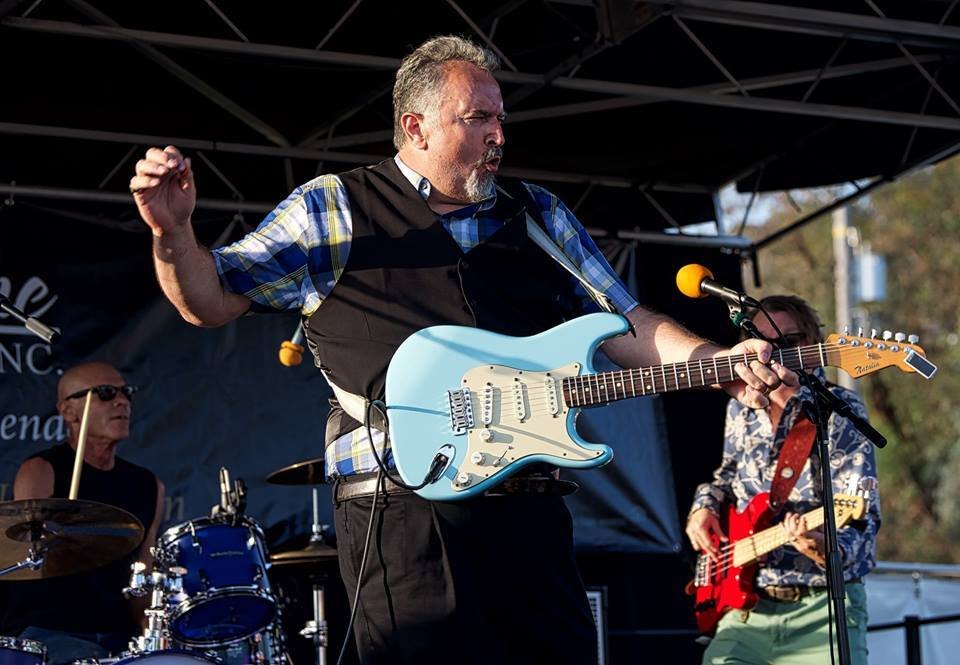 Frankie G & the Conviction is a high-energy blues and grooves band who delivers a powerful show with an eclectic style of the blues - and just good rockin' music.

While presenting a strong cache of classic and contemporary blues music, The Conviction mix-in powerful originals displaying their creativity and talent. To the personnel who make up the band, the music is very important as is performing to the crowd. The band believes the audience is there for good music and a good time - both are delivered with confidence and Conviction.

Frankie G ~ Guitar/Vocal: Prior to FG&C, Frankie G headed up the East Bay band Killin' Floor for 9 years. Many festivals made Killin' Floor an annual staple in their line up for the crowd-pleasing talent of Frankie G. Emotional and passionate in style, Frankie holds nothing back when he performs for the crowd. Influenced by the likes of Freddie King, SRV, Eric Clapton and Johnny Winter, his own style shines through and delivers the goods.

Mac Akin ~ Bass/Vocal: Originally from the NYC/NJ area music scene, Mac has firm roots in Blues, Rock 'n' Roll and Western Swing. His solid, Fender, four-string styled approach, holds down the groove and keeps the The Conviction drivin'. Influenced by the classics, Mac is as solid and as funky as they come.

Kathy Tejcka ~ Piano: Hailing from Lincoln, Nebraska, where she fronted her own band for 8 years, keeping the blues and honky-tonk alive. She moved out west and was warmly welcomed by North-Beach icon, Johnny Nitro. Kathy maintained her door-slammer position for over 5 years, until Nitro's untimely passing. Her flawless piano and barrel-house vocals keep her as a crowd favorite.

D'Mar: Derrick “D’MAR” Martin’s is standing between two worlds where the gap grows by the day and D’MAR is the epicenter .He is simply a force of nature. D'MAR is a musician, producer, songwriter, singer, educator, entertainer and motivational speaker. He has been traveling the world for the last 16 years as the lead drummer for the legendary Little Richard. D'MAR has also worked with a number of other artists such as: Dorothy Moore, Bobby Rush, Vastie Jackson, Ali Woodson (The Temptations), Big Jack Johnson, Billy Preston, Roy Gaines, Mitch Woods, Mark Hummel, Jackie Payne, Kid Andersen, Syl Johnson, Bob Margolin and Tutu Jones just to name a few.

Stewart Burr ~ Drums/Vocal: Burr, an East Bay resident, chooses the drums as a lifestyle and as a profession. Playing with talents such as Red Archibald and "the legendary" Chubby Checker, Stewart adds an energy and feel to all rhythms. With a degree in Jazz studies and European tours under his belt, he is content rockin' with The Conviction and performing for the crowds.