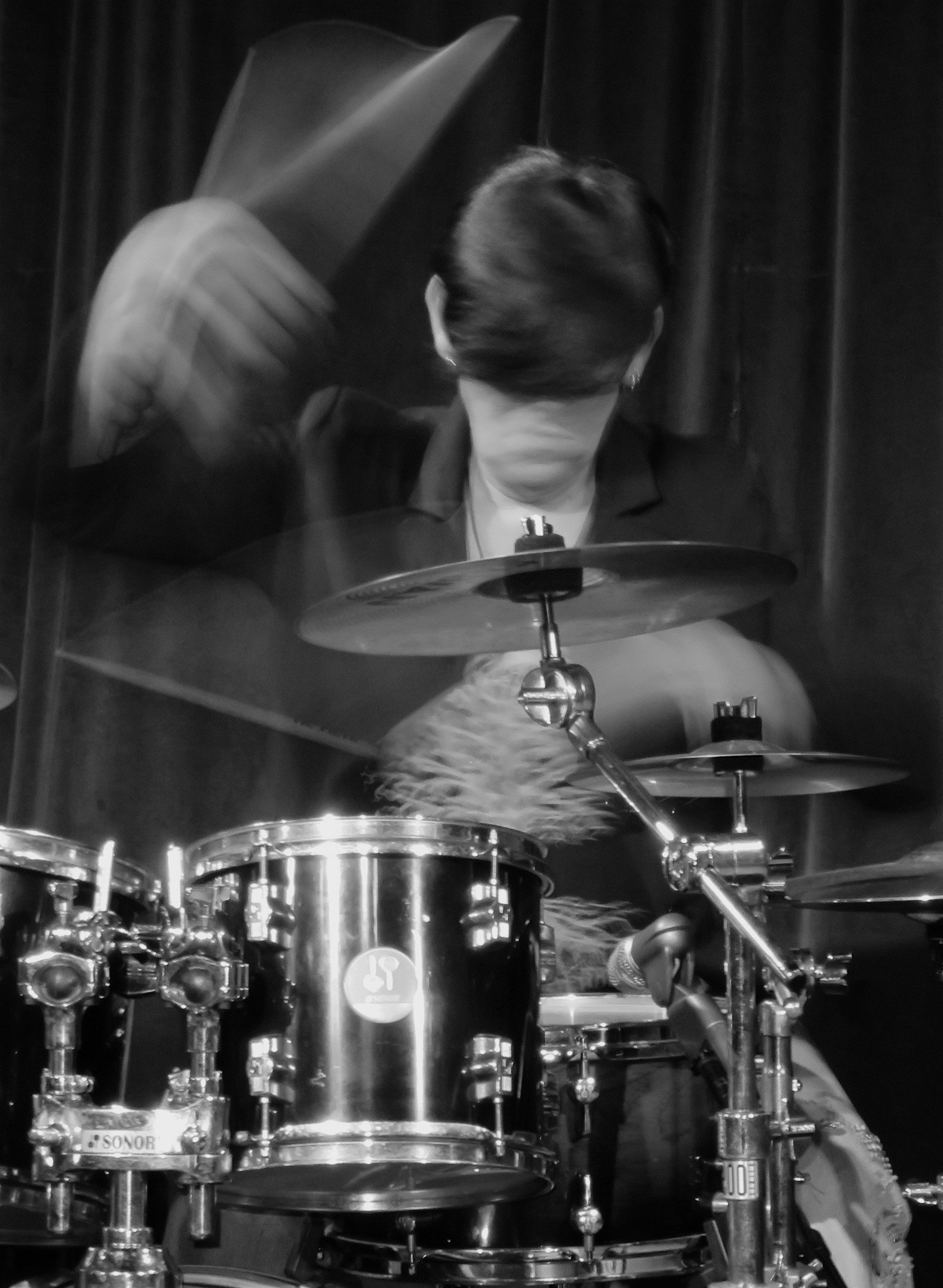 Billie Davies is a self-taught natural drummer and a composer best known for her free, instinctively avant-garde compositions since the mid nineties, and her improvisational drumming techniques she has performed in Europe and in the US. All of her music is improvisational ... reminding us sometimes of, as Jerome Wilson put it on AAJ, "the spiritual jazz tradition, as exemplified by John Coltrane, Alice Coltrane and Pharaoh Sanders. Billie Davies' work reminds you of many different things but in the end, it is its own original beast, as powerful as anything more well-known musicians have created..".
HER MUSIC IS IT'S OWN ORIGINAL BEAST

“As with several aspects of the playing I was reminded of a wide ranging mix of styles of the Art Ensemble of Chicago. There is total commitment to musical improvisation and, as is also the case with so much of her work, the resulting sound has such unity of purpose that it feels as if all the players must be working from charts rather than spontaneously creating the pieces.” Chris Baber for Jazz Views.

She made a permanent move to the US in December of 1986.
Her 2012 release of “all about Love” solidified her position as a professional jazz musician. This recording of standards and original music, charted #1 in CMJ Jazz College Radio Charts for ‘top jazz add’ in new albums and went on to stay in the top 20 for 4 weeks. Also well received in Canada, the album ended up in the Top 10 on three different !Earshot Jazz charts.
In October, 2013 Billie released “12 VOLT” which garnered national and international attention. CJ Bond, JAZZ MUSIC, wrote, “12 VOLT” features exclusively original compositions of Billie Davies, and adds the crucial tyne of 'composer/arranger' to her sterling artistic fork, augmenting fearless innovation. Jan Hocek of His Voice in Prague wrote:”Without hesitation - HIGH VOLTAGE avant-garde JAZZ - one of the most remarkable trio albums of the year!"
In 2013 Billie Davies received the "Jazz Artist of the Year" Award by the 23rd Annual Los Angeles Music Awards.
In March of 2014 she moved to New Orleans where she has graced stages ever since.
She received more attention due to a player feature in Downbeat Magazine May 2016 edition, "BILLIE DAVIES '20 Years Stronger'" after releasing "Hand In Hand In The Hand Of The Moon" in 2015.
"On Hollywood Boulevard", her CD released in 2016 became a January 2017 Editor's Pick on DownBeat.com.
December 2017 Billie Davies was nominated for "Best Contemporary Jazz Artist" in New Orleans by Best Of The Beat and in 2019 they nominated her for "Best Drummer".
September 2018 She released "PERSPECTIVES II" by BILLIE DAVIES trio Featuring Ari Kohn, woodwinds, Iris P, vocals and Allie Porter, vocals.

By 1977 Billie was working in the Private Night Club sector as a DJ in Cologne, Germany. That set the stage for a successful DJ career in Belgium a few years later, she remembers "Les Cinq Anneaux" where she packed the house every weekend. She became one of the top DJs in demand in Private Night Clubs, Disco Clubs and Bars.
Aged 25 Davies started the transition to become a professional musician.
She played and performed in the Netherlands, Belgium, France, Italy, Spain, Portugal and Greece for the next 7 years.
At a crossroads in her musical career, in 1984, while living and performing in the South of France (Montpellier, Toulouse, Biarritz, La Rochelle), Billie ended up receiving a grant from Max Roach to study at Berklee College of Music, this was after he heard one of her tapes she laid down with a bass player she met in Montpellier, France. Billie was however having too much fun in the south of France, living the life of a gypsy jazz musician and therefore decided not to take the offer. In Max Roach's words: "Hearing from your tape, you could learn more fundamental drumming techniques, but I also hear the natural drummer, so my advice is for you not to worry too much about your technical skill, you will develop your own, I can definitely hear that, but just in case that you might want to study in a good program, please accept my invitation in the form of a talent grant to come study at the Berklee College of Music, all you need to worry about is finding a place to live and some money to survive".
A move to the United States at 32 gave her an opportunity to play all over the west coast. In 1987 in Oregon, she met and played a few times with Leroy Vinegar, and then later in early 1988 she moved to California, San Francisco where she was mostly active in North Beach and in the Lower-Haight district, where she met and ended up playing a few times with John Handy and played frequently with local jazz notables at their unforgiving jams, in her words: the best learning school she ever had.
In the mid-nineties she recorded "Cobra Basemento", that included "The Man From Tollund", and "Dreams", the infamous boombox recordings, with Saul Kaye and Mike Goodwin. They were preserved for the future in 2004 & 2005.
In 2009 she moved to Hollywood, California and released "all about Love." with Tom Bone Ralls and Oliver Steinberg and "12 VOLT" with Daniel Coffeng and Adam Levy and LAMA awarded her best Jazz Artist in 2013.
In March of 2014 she moved to New Orleans where she released "Hand In Hand In The Hand Of The Moon", with Evan Oberla, Alex Blaine, Branden Lewis and Ed Strohsahl, "On Hollywood Boulevard" with Evan Oberla, Oliver Watkinson and Iris P and "PERSPECTIVES II" with Evan Oberla, Oliver Watkinson, Ari Kohn, Iris P and Allie Porter.
She was nominated "Best Contemporary Jazz Artist" by 2017 Best Of The Beat Awards and OffBeat Magazine, in 2019 they nominated her "Best Drummer".