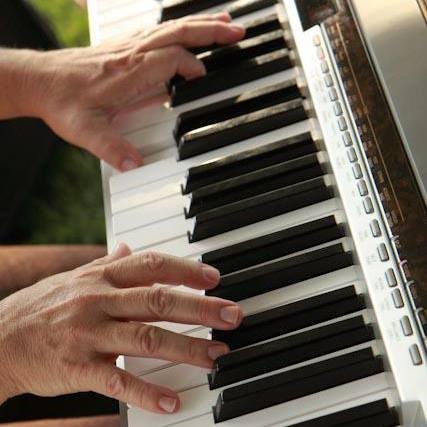 Arlene is an experienced pianist in the field of jazz, working in the Mid-Michigan area and beyond for over 3 decades. She performs a wide variety of musical engagements from clubs and festivals, playing as a solo artist as well as in small groups, big bands, and wedding combos, both as a leader and side musician. Included in these venues are appearances at the Michigan Jazz Festival (Livonia), Summer Solstice Jazz Fest (East Lansing, MI), Lansing's Old Town Jazz Fest, Kirtland College Performing Arts Center, East Lansing Art Festival, Creole Gallery, The Firefly Club of Ann Arbor and Soaring Eagle Casino (Mt. Pleasant, MI).

In 2010 Arlene’s quintet recorded a 3 tune Demo CD, including the original composition 'Contemplation'. The quintet played the Summer Solstice Jazz and Michigan Jazz Festival in Livonia.

The 2009 release of the CD ‘Timeless’ by the Arlene McDaniel Trio has received airplay on local stations and online, around the country and across the globe. The bulk of the CD contains original compositions. ‘Timeless’ is available online at CD Baby, iTunes, Amazon.com and numerous indy sites.

Currently Arlene is an on the Adjunct Faculty of Hillsdale College, where she is a private jazz piano instructor, and performs with the faculty jazz ensemble 'The Hillcats'. She also teaches jazz piano at the MSU Community Music School, and in her private home studio.

In addition to performing and teaching, Arlene was the booking agent for The Cappuccino Café, located in East Lansing, from 2001 up to it’s close in 2008, and then when it reopened as Espresso Royale from Feb – July 2010. Between jazz and variety bands there was a rotation of approximately 30 bands during the Cappuccino Café stint. As a perk of this job Arlene’s trio was a regular performer at the café. She worked with a variety of groups (including her own) at the Cappuccino Cafe for a total of 15 years.

Other venues worth noting would be numerous special performances at the Perspective 2 Studio in Old Town Lansing, ENSO (East Lansing), The Waterfront Bar & Grill (Lansing), and the University Club in East Lansing, MI. In addition to these special performances Arlene has also appeared with the Franki Valli tribute group “Let’s Hang On”, the Jimmy Dorsey Band and The Pied Pipers. Notable artists Arlene has performed with are clarinetist Dave Bennett, bassist Robert Hurst, and vocalist Sunny Wilkinson.

From 1996 - 2000 Arlene was involved in a mentoring program intended to guide young women interested in jazz, and working in the field – “Sisters in Jazz”. Sponsored by the IAJE (International Association for Jazz Education), this international program was launched in part by Sunny Wilkinson, internationally known jazz vocalist/educator. They performed concerts around Michigan, including the Montreux-Detroit Jazz Festival, Ypsilanti Heritage Fest, and Taste of Detroit Festival.

Arlene holds a Bachelor’s Degree in Music Theory/Composition from MSU (1984). Also an experienced educator, Ms. McDaniel has taught traditional and jazz piano since 1984, concentrating mainly on jazz. She held an adjunct faculty (jazz) position at Olivet College from 1986-88. Arlene accompanied the Michigan State University Vocal Jazz Ensemble I, directed by Sunny Wilkinson from 2005 – 2008.