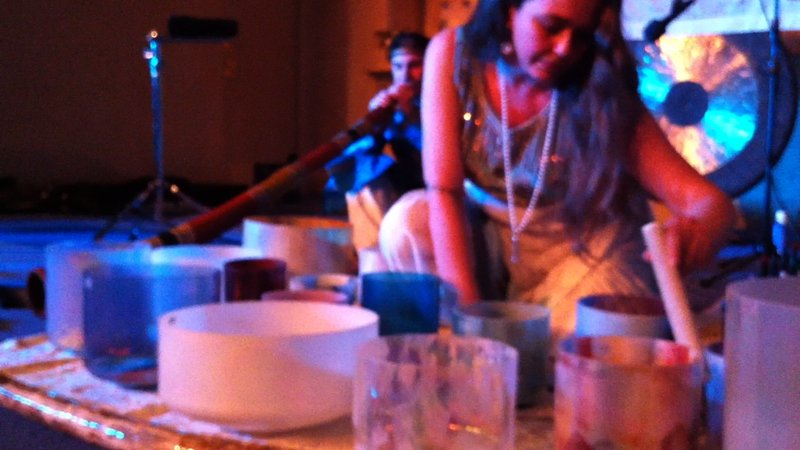 Paradiso and Rasamayi are twin flames and Ambassadors of the Sacred Sound Current who have helped shape the current “music for meditation” landscape. They are dedicated to serving the healing and evolution of humanity with their beautiful, powerful and utterly unique instruments and the “evolutionary music” which flows through them.

They have been identified as the #1 independent World Music band in the world, and have birthed four albums: 3rd Eye Rising, Attuning to Oneness, Celestial Resonance and their latest, Agape Evolution: The Movement. Each album has topped its genre’s international radio charts, and they have won four Best Album of the Year awards (Best Frequency and Transformation, Best Meditation and Relaxation, and two Best New Age Album of the Year awards). Agape Evolution debuted at #9 on the Billboard New Age charts.

Paradiso and Rasamayi have served worldwide via international radio airplay and interviews, and have co-created in projects and concerts with luminaries including Michael Bernard Beckwith, Jonathan Goldman, Stephen Halpern, Gregg Braden and Dr. Masaru Emoto.

They have toured throughout the United States for almost a decade, facilitating live transmissions of a multi-harmonic overtone orchestra transportive and transformative frequencies in festivals, New Thought churches, yoga and wellness centers in 49 of the United States. Paradiso is a master didjeridoo artist who has played at Carnegie Hall, and learned to play and facilitate healing in a three month series of dreams. Rasamayi is the only identified Singing Bowl Alchemy Master-Teacher.

Paradiso and Rasamayi have a weekly radio show "Evolutionary Frequencies" on Oneness Talk Radio. The show gives inspiration and tools to illuminate your path.
https://onenesstalkradio.com/shows/evolutionary-frequencies/

Hear samples of their music at https://www.reverbnation.com/rpk/songs/160684

The track All Is Love was commissioned by Neale Donald Walsh’s Humanity’s Team and is track 11 on 2014’s COVR Best New Age Album of the Year winner, Attuning to Oneness. Bliss is the first track on 3rd Eye Rising, the twin flames’ 2012 debut collaboration which won the Independent Music Award for Best New Age Album of the Year and was featured in Dr. Masaru Emoto’s MyHado application. They were the #1 worldwide independent World musicians on ReverbNation when their newest album, Celestial Resonance, debuted at #4 in the international New Age radio charts. Paradiso has four other bestselling and New Age Radio chart-topping CDs: Himalayan Chakra Healing, Middle Path, Shaman’s Trance and Healing Vibes. **Please do not listen for the first time while driving, or with lower quality speakers. Quality headphones often provide the most profound experience.